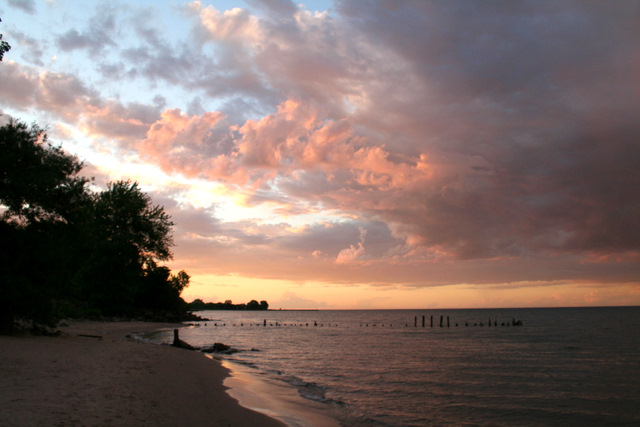 Evanston 2008 Being in Denmark around the 23rd of June will enable you to experience the bonfires in celebration of midsummer. This particular tradition offers insight into the Danish culture of cosiness.
You should not miss out on an enjoyable and fundamental Danish tradition. This is the evening when the Danes celebrate what has come to be known as "Sankt Hans aften", which can be translated as the evening before the day of Saint John the Baptist. 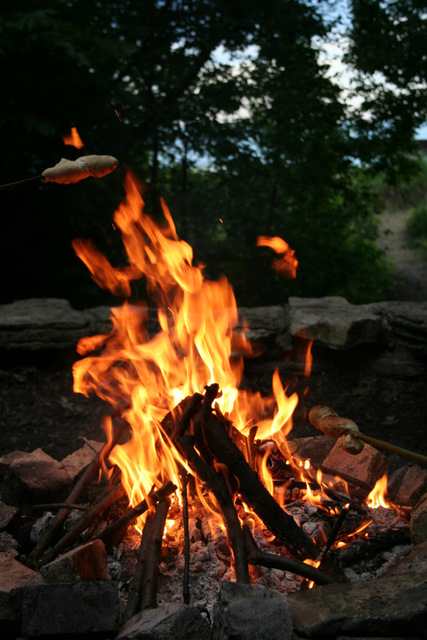 Evanston 2008 Those who know that Denmark is a protestant Christian country may wonder why people would honour the predominantly catholic custom of celebrating the day of an individual saint such as John the Baptist. Actually, this tradition has its roots in ancient, pre-Christian folklore, but it was adopted and quietly transformed by the church, when Christianity became the official state religion back in the year 965.
After the reformation of 1536, when Denmark adopted the protestant faith, the desire among ordinary people to celebrate Sankt Hans was still so strong that an act outlawing the tradition in 1743 went by unobserved and was quickly withdrawn.
Originally, the cause for celebration of midsummer arose from a pagan belief that in the period around summer-solstice nature would have reached a peak in the sense that humans, plants, soil, trees and even springs were filled with energy coming from the sun and that from this point on nature's energy stores would deteriorate as the hours of daylight and sunshine gradually decreased.
For pagan mystics the days around summer-solstice were thus the best time to go out in the countryside and cut herbs and plants for use in their concoctions. After Christianity had made its entry into Denmark, such activities were generally frowned upon, and people tended to believe that gathering together and lighting huge bonfires would be a good way to ward off evil spirits and witches, who might otherwise bestow evil curses upon their land or their animals. At the same time, however, many people believed that this night proved a particular good time to visit one of the many holy springs of the countryside, as the water was supposed to be charged with very special healing qualities on this night. Several other rituals including dressing up the livestock with special decorations made out of leaves and twigs were carried out by superstitious farmers in order to protect their cattle from incursions of evil spirits. 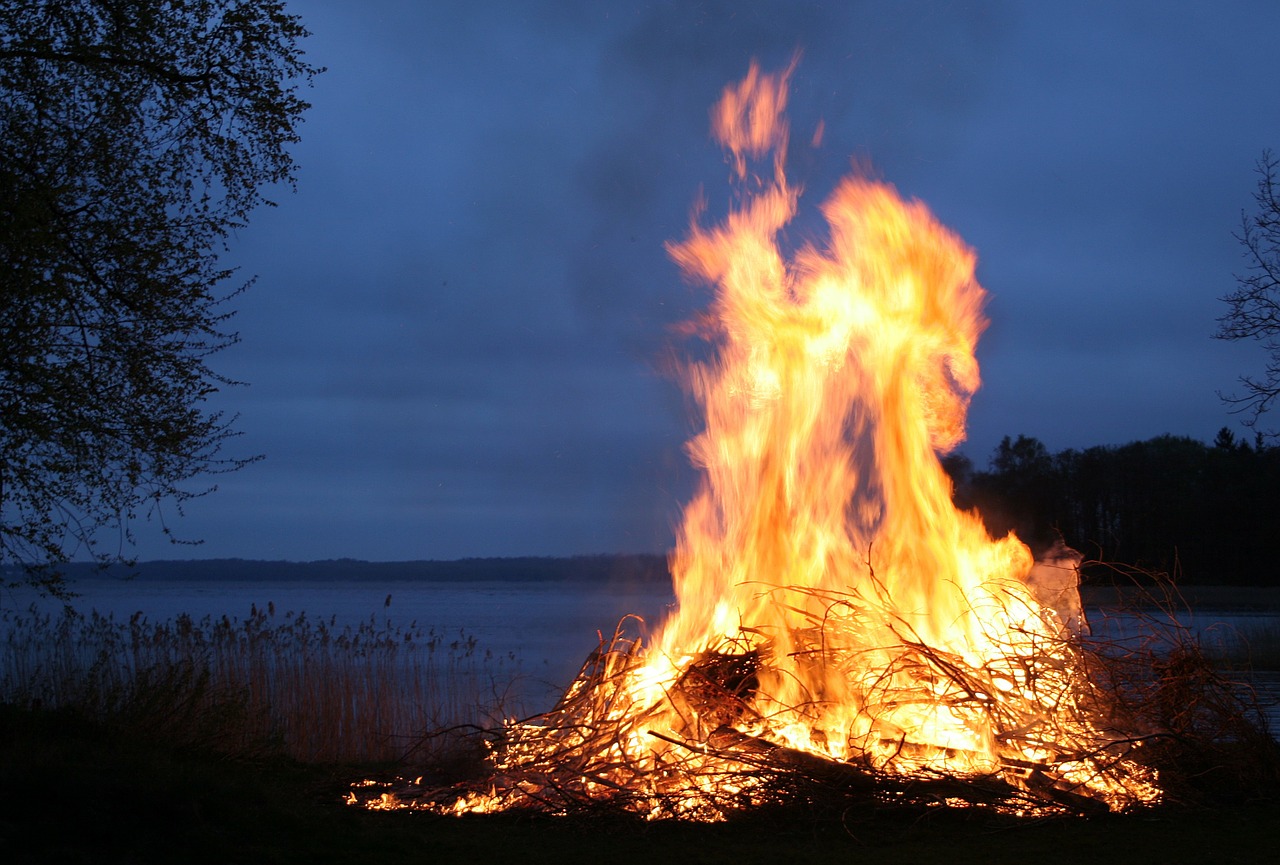 Typical Skt. Hans Fire
Over time, the tradition of lighting bonfires became the dominant and other rituals gradually withered away as people preferred the cosiness of gathering around a warm fire. Songs and music had always been a part of this tradition, but during the 19th century the traditional folk songs were replaced by patriotic songs. The most well-known of these is "Vi elsker vort land" ("We love our country") also known as "Midsommervisen" ("The Midsummer Song"). It is sung at every Sankt Hans-celebration across the country and is thus very important to know of. It was written in 1885 by the Danish poet Holger Drachmann, and the original version had music by P. E. Lange-Müller. In 1979 the Danish pop icons in the band "Shu-bi-dua" composed a new melody for the song, and since then either version has been in use at Sankt Hans-celebrations all across the country.


Click here for lyrics for "Midsommervisen".
In the beginning of the 20th century, it became common to affix a figure resembling a witch on top of the bonfire. This tradition came from Germany, and some Danes regard this particular part of the tradition with mixed emotions as it evokes memories of the horrible persecutions and "witch"-burnings carried out in Denmark and other European countries in the 17th century. However, this custom is only a little part of the overall tradition, and it is easy to forget about the negative associations once you immerse yourself in the general atmosphere of cosiness surrounding the celebrations.
The most recent addition to the Sankt Hans-celebrations is the custom of the recent high school graduates to meet up at the bonfires to throw their lecture notes into the fire and to generally enjoy their last party before going on summer holidays. In the weeks before Sankt Hans, these students will have finished their last exams and will have been celebrating at numerous parties with their classmates. They are easily recognisable as they will be wearing their traditional white caps with red or blue rims and a black peak for the last time on this evening.

Tips on how best to experience the celebrations 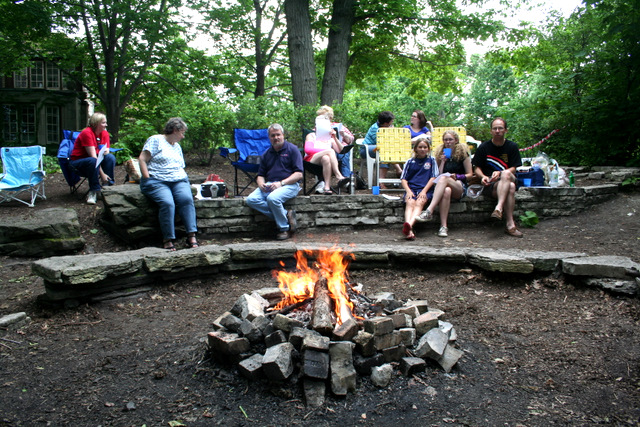 Evanston 2008
If you are not so lucky as to have been invited to a celebration by a Danish friend, you can still enjoy much of the atmosphere on your own. In the author's opinion, the best way to enjoy a Sankt Hans-celebration is to go the coast. The many villages along the Danish coastline will all have their own Sankt Hans-bonfire, and you should be easily able to find one by either driving around or asking at the nearest tourist office. The bonfire is typically lit at any time between 8 and 10 in the evening, so it is a good idea to arrive a little early and to bring along several carpets and a picnic basket with food and some wine or beer to enjoy while waiting for the bonfire. Some people even bring along the small barbeque grills that can be used only once and make their own barbeque on the coast while waiting. (Remember to take your garbage with you. Polluting the coast is severely frowned upon in Denmark.) Just before the bonfire is lit there will be a so-called Sankt Hans-speech typically performed by a prominent member of the local community. Typically the mayor or another local politician, but artists and writers have also been known to do these speeches. The topics of the speech will center around Danish history, traditions and values, and how society is changing today, but that many of the traditional Danish values are still relevant in a modern day context. When the speech is finished, people will typically proceed to singing the Midsummer Song and the fire will be lit.
This is considered to be a very beautiful and cosy moment as everyone will be looking into the fire and at each other. Families will be there and the little kids will be fascinated by the flames and sparks of the fire. The students will be present and will be singing, dancing and drinking, and they will be busy throwing their lecture notes into the fire. Boats will be in the water admiring the bonfire from a distance. If you take a look along the coast you will see numerous small fires. This is a sight, which reminds Danes that they belong together, and that Denmark is a country with many open shores - both geographically and in the figurative sense. Fireworks may also form a part of the bonfire, if the local city council or harbour authority have decided to spend the extra money, but this is by no means essential.
It is of course also possible to enjoy a Sankt Hans-bonfire without going to the coast. In Copenhagen, for example, there are numerous bonfires across the city. The Tivoli Gardens have organised one in the last few years, and there is also one in "Fælledparken" (The Commons) and another one on the lakes of Copenhagen. But as before, if you are in doubt, ask your local tourist office.